Guest Post: THE SHADOW PRINCE Teaser Tuesday #11 - In which Hubby geeks out all over the place

Hi guys! It's me, Brick.  Bree is on deadline, which means she has pretty much looked like this for the last couple of weeks:
So, to try to help her out I'm posting this week's Teaser Tuesday.  Which means I get to pick  the teaser.  But first, let me tell you a quick story.

About a year and a half ago, my relatively new (to me anyway) car decided it didn't want to be a car any more.  It decided it'd rather be a cube of metal in a pile of other cubes of metal.
I had to respect this decision, but I didn't have to like it.  I'll be honest.  I was disappointed.  However, not being one who enjoys being car-less, I picked myself up by my bootstraps, wiped the tears from my eyes, and moved on.  That's when I found this lovely:


I was very excited to get a Leaf. Sure, maybe its not the sexiest thing out there, but its still pretty darn cool. Not to mention that my car payment is only slightly more than what my monthly gas budget was--basically making it the cheapest car I've ever owned. And though it has caused us to adjust our lives a little, I've loved having it ever since. But I digress. There is a point to telling you this. So lets get to it.

Bree was still working on THE SHADOW PRINCE when I got the Leaf, and saw this acquisition as a perfect opportunity to conduct some research.  As you may have learned from reading the first two chapters last week (click here if you still haven't... which, btw- WHY NOT?!), Haden has been graced with the ability to throw lighting as part of his Underlordy powers.  So this is the conversation that was had while filling out the paperwork at the dealership:

Salesman: "We're almost done.  Do you guys have any questions?"

Bree: "Yes.  So, if you--hypothetically--could say, I don''t know... shoot lighting out of your hands... could you use that to instantly charge an electric car?"

I paraphrase of course.

So based off this very scientific research, and knowing that Haden both has said power and needs a much sexier car than me, he was given one of the coolest cars on the planet in THE SHADOW PRINCE.

Ooh, and take a look inside too.

So not only does Haden get my dream car.  He also gets to drive it like a BAMF while being chased by an unknown assailant on a motorcycle through the streets of Las Vegas.  Oh crap, wait... was that a spoiler?  No.  No, that was just more of the teaser... hehehe, right?  Oh, and I guess it actually wasn't the model S he was driving at the time.  It was this:

Ok.  Enough car talk.  Its' giveaway talk time  Bree is still giving away an iPad Mini and the opportunity to have a character named after you in the sequel to THE SHADOW PRINCE. So if you haven't entered to win yet, you still can, and if you have entered don't stop reading because THERE ARE NOW TWO NEW WAYS TO GAIN ENTRIES IN THE CONTEST! (Yep, you can enter again!)

Here are all the ways you can enter to win the Bree's iPad + awesome character named after you giveaway:


1 – Pre-Order THE SHADOW PRINCE through The Kings English or another bookseller of your choice like IndieBound, Amazon, Barnes and Noble, Books A Million. . . you get the idea. Don't forget to send the receipt to readbree (at) gmail.com to get a special swag-pack sent to you from Bree. And if you pre-order from The King's English your swag-pack will also include an exclusive pomegranate charm necklace as a special gift from Bree.

4 – Leave a comment on the Hypable post hosting the first 2 chapters of THE SHADOW PRINCE and let Bree know what you think.

6 NEW* – Post the "I'm excited for TSP banner" to the sidebar of your blog, tumblr or website. (banner code and image posted below)

(For more details about the contest and info on the pre-order swag-packs, read last week's post.) 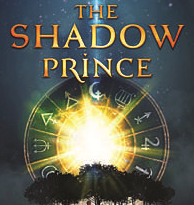 Posted by Bree Biesinger Despain at 11:29 AM
Email ThisBlogThis!Share to TwitterShare to FacebookShare to Pinterest
Labels: contests, giveaways, The Shadow Prince Teaser Tuesday