So it's that time again when I get to spread the love (i.e. rant and rave) about something that I think is truly awesome. And I've been saving this post for something (and someone) that has brought pure giddiness and joy into my crazy and hectic life over the last few weeks: 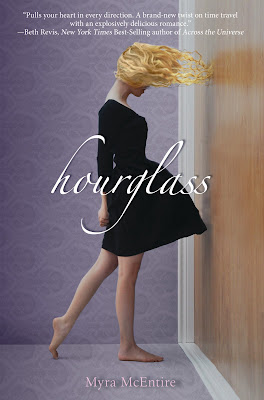 For seventeen-year-old Emerson Cole, life is about seeing what isn't there: swooning Southern Belles; soldiers long forgotten; a haunting jazz trio that vanishes in an instant. Plagued by phantoms since her parents' death, she just wants the apparitions to stop so she can be normal. She's tried everything, but the visions keep coming back.So when her well-meaning brother brings in a consultant from a secretive organization called the Hourglass, Emerson's willing to try one last cure. But meeting Michael Weaver may not only change her future, it may change her past.

Who is this dark, mysterious, sympathetic guy, barely older than Emerson herself, who seems to believe every crazy word she says? Why does an electric charge seem to run through the room whenever he's around? And why is he so insistent that he needs her help to prevent a death that never should have happened?

Full of atmosphere, mystery, and romance, Hourglass merges the very best of the paranormal and science-fiction genres in a seductive, remarkable young adult debut.

I'd been wanting to get my hands on Myra's book ever since I first read about the premise several months ago. Then I got to know the hilarious Myra McEntire over twitter and email, and I wanted her book even more. And then when Myra showed me the cover, I was like: MUST. HAVE. NOW.

Luckily, Myra and I share the same publisher, so I concocted a wild scheme to infiltrate their offices in order to kidnap Elizabeth Law's life-size Edward Cullen cutout to hold for ransom in exchange for an advanced readers copy of HOURGLASS. However, someone else beat me to the kidnapping. And as it turns out, all I had to do was ask nicely (a.k.a. leave huge hints that I was dying to read it/would kill someone in order to get a copy) and my super editor sent me the book.

Let me tell you: BIG mistake on his part. Because all writing on THE SAVAGE GRACE ceased the moment I started reading HOURGLASS. (Don't worry, I'm back to writing again.)

HOURGLASS fully lived up to my high expectations. I am totally jealous of Myra's killer descriptive prowess. I just love the way she can describe a character/action/setting with just a few, choice, evocative details that make me want to swoon with writer envy.

The other thing swoon-worthy about this book are the guys. All I can say about Micheal and Kaleb without going on for another hour is: YOWZA! The passion and yearning electrifies the pages of this book. (Yet it's still pretty darn clean for readers who are sensitive to those sorts of things.)

And by far the best thing about HOURGLASS is the main character, Emerson. As many of you know, I am the mother of all boys--whom I love with all my heart and wouldn't trade for anything. But sometimes, my heart also aches for the daughter I don't have, and the name I've had picked out for a little girl ever since I was in college just happens to be Emerson. And if I had a daughter, I'd want her to be a lot like the main character of this book (minus the stint in the mental institution): sassy, witty, intelligent, able to beat up boys, but still looks adorable in an awesome dress.

*Side note: If I had 2 daughters, I would have named the second one Ava, which happens to be the name of another character in this book--but I wouldn't want my daughter to be like her. (You'll see why.)

Okay, so have a I ranted and raved enough? What more do I need to say to convince you to GO. READ. THIS. BOOK??

Oh, one last thing. Reading this book will make you feel smart. Because not only is it sexy, it's also full of science (but not in a "Yikes, this makes my brain hurt!" sort of way).

And one last, last thing--HOURGLASS hit stores today, so now you can read it too!

For all this goodness, I hereby declare today:

Spread The Love for Myra McEntire and HOURGLASS Day! I highly suggest you celebrate by picking up a copy of the book and cancelling all other plans until you're done reading.


**Disclaimer: I have NOT been asked to endorse this book by Myra, my publisher, or anyone else. I simply wish to spread the love for books that I truly enjoy.

p.s. What do you think of the new blog format? I think it's easier to read. Hope you like it.
Posted by Bree Biesinger Despain at 9:03 AM 5 comments:
Email ThisBlogThis!Share to TwitterShare to FacebookShare to Pinterest
Labels: books I like, Hourglass, Myra McEntire, Spread the Love
Newer Posts Older Posts Home
Subscribe to: Posts (Atom)