5. String on a guitar pick necklace. 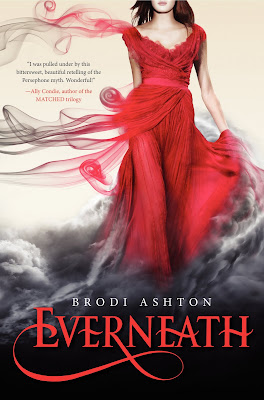 Synopsis:
Last spring, Nikki Beckett vanished, sucked into an underworld known as the Everneath, where immortals Feed on the emotions of despairing humans. Now she's returned- to her old life, her family, her friends- before being banished back to the underworld... this time forever.
She has six months before the Everneath comes to claim her, six months for good-byes she can't find the words for, six months to find redemption, if it exists.
Nikki longs to spend these months reconnecting with her boyfriend, Jack, the one person she loves more than anything. But there's a problem: Cole, the smoldering immortal who first enticed her to the Everneath, has followed Nikki to the mortal world. And he'll do whatever it takes to bring her back- this time as his queen.

As Nikki's time grows short and her relationships begin slipping from her grasp, she's forced to make the hardest decision of her life: find a way to cheat fate and remain on the Surface with Jack or return to the Everneath and become Cole's...

I can't tell you how excited I am for the launch of Brodi Ashton's debut novel, EVERNEATH. If you read this blog, or follow me on twitter, it's probably no secret that Brodi is one of my very best friends--Which might you lead you to believe that I'm totally biased when I tell you that EVERNEATH is one of the best books I've read in like years. But you'd be wrong. No bias here at all. Whether or not EVERNEATH had been written by one of my most favorite people, or by a complete and total stranger, it wouldn't change how much I love this book. Being BFFs with Brodi just makes it less weird when I show up to her signings dressed like I belong in her book and go all fan-girly over Jack and Cole. (Oh wait, does that actually make it more weird? Oh well. Still doing it.)
I loved EVERNEATH so much that when I finished reading it, I turned to Brodi (who just happened to be sitting in the seat next to me on an airplane heading to L.A.) I first had to wipe the tears from my eyes, and then I said to her, "I'm resign from writing so you can write all the books from now on. I hereby bequeath all of my words to you."

Of course, Brodi's first reaction was to tell me that I was being an idiot about quitting writing (I hadn't even finished TSG yet). And then of course she spent the rest of the flight hounding me with questions to make sure I didn't just like the book out of BFF love--to which I passed with flying colors. (See, no bias.)

Anyway, today is EVERNEATH's release day, which means everyone gets to read one of my favorite books now. And that is definitely worth celebrating!

If you're in Utah, you should come on out to the launch party at King's English Bookshop tonight at 7 p.m.! Brodi will be speaking and signing books, and the rest of us will be partying "Dead Elvises" style.

If you can't make it to the launch, then I highly suggest you visit a bookstore or library near you to pick up a copy of EVERNEATH. You won't regret it!

(Unless you have a problem with awesome, that is.)

Now I'm off to shellac my nails with some cherry red polish . . . .
Posted by Bree Biesinger Despain at 9:34 AM 2 comments:
Email ThisBlogThis!Share to TwitterShare to FacebookShare to Pinterest
Labels: book reccomendations, books I like, Brodi, Everneath 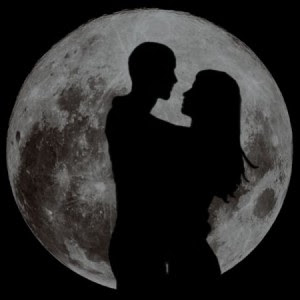 The full moon is upon us once again . . . which means it's time for another full moon extravaganza giveaway! This week, Egmont USA is giving away 10 bottles of THE SAVAGE GRACE nail polish. (And you know you want some.) I don't have any official bottles on hand for a pic, so I painted my toenails with a sample of the color so you all can see it. My feet look so happy and spring-timey, it makes me want to take off for a beach in the Bahamas or something.

See! (You'll have to tilt your head sideways because I have no idea how to rotate a picture.) 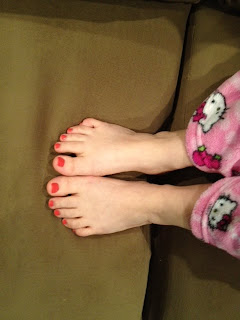 (And you know you want my Hello Kitty jammies, too. But those I'm keeping.)

So how can you get your very own bottle of fabulous THE SAVAGE GRACE nail polish? Well, I'm glad you asked. All you have to do is visit THE DARK DIVINE Facebook page and click the "Like" button on the contest post. You can get there by clicking HERE.

You can get a second entry in the contest if you also change your profile pic (for this week) to one of the book covers in the Dark Divine trilogy. (THE DARK DIVINE, THE LOST SAINT, or THE SAVAGE GRACE.)

The contest will run from today until next Sunday. Winners will be announced on the TDD Facebook page.

(Sorry, due to international shipping restrictions, this contest is only open to U.S. residents.)

Now go forth and enter!

P.P.S My very awesome BFF, Michelle, just entered the world of book blogging. I thought I'd give her a shout out and tell you all to visit her neat new blog, dedicated to celebrating favorite reads: I Loved This Book.
Posted by Bree Biesinger Despain at 6:20 PM 6 comments:
Email ThisBlogThis!Share to TwitterShare to FacebookShare to Pinterest

Two books you should run out and buy TODAY!

I hope you had a fantastic holiday break. I know I did--hubs had a whole week off! But I have to say that it is nice to have the kids back in school. Well, except KidA only lasted a whole hour and a half before he told his teacher that he had a tummy ache and the school sent him home. (Grrrrr.) Actually, I'm pretty sure he really does have a tummy ache. The poor kid always has a tummy ache--he's just cleverly figured out that the school's policy is that if he says he has a tummy ache they'll send him home for fear of the stomach flu. So even though he doesn't have the stomach flu, he's been working the system . . .

(Side note: KidA was just diagnosed as being allergic to dairy, gluten, and soy. We are working on eliminating all of these things from his diet, and hopefully the tummy aches will soon be a thing of the past.)

Anyway, I'm daydreaming about having a little bit of reading time to myself in the next month, which got me thinking about a couple of books I'm dying to pick up from the book store (and would be doing right now if I didn't feel bad about dragging my boy with a tummy ache out of the house).

So therefore, dear readers, I think you guys should go out and pick a couple of books for yourselves, and think about me while you do . . .

There are many awesome new books that have come out this week and the last, but the two I would most definitely pick up for myself are:

1. EVERY OTHER DAY by Jennifer Lynn Barnes 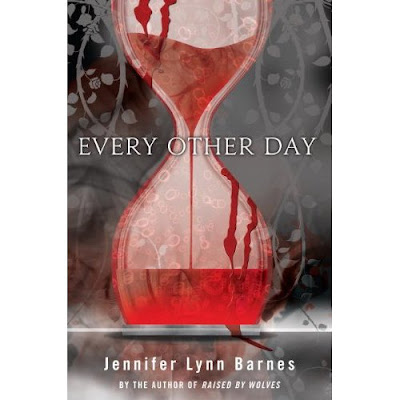 Every other day, Kali D'Angelo is a normal sixteen-year-old girl. She goes to public high school. She attends pep rallies. She's human.

And then every day in between...She's something else entirely.

Though she still looks like herself, every twenty-four hours predatory instincts take over and Kali becomes a feared demon-hunter with the undeniable urge to hunt, trap, and kill zombies, hellhounds, and other supernatural creatures. Kali has no idea why she is the way she is, but she gives in to instinct anyway. Even though the government considers it environmental terrorism.

When Kali notices a mark on the lower back of a popular girl at school, she knows instantly that the girl is marked for death by one of these creatures. Kali has twenty-four hours to save her and, unfortunately, she'll have to do it as a human. With the help of a few new friends, Kali takes a risk that her human body might not survive...and learns the secrets of her mysterious condition in the process.

I first heard about EVERY OTHER DAY when I met Jenn a couple of summers ago. Not only did I discover that Jenn one of the cutest, nicest, and smartest authors I've ever met, I also got the scoop on this killer new book almost a year and a half before it came out--which needless to say, means I have been DYING to read this book for that long. I am so excited that it is finally available. (You think since we share the same publisher that someone would have hooked me up with an advance copy, but no, I've had to wait in agony for this one. And will apparently have to wait a little longer until KidA's tummy ache subsides. Darn you, food allergies!)

And the second book I'd run out to go buy this very minute is I could . . .

2. UNDER THE NEVER SKY by Veronica Rossi


Since she’d been on the outside, she’d survived an Aether storm, she’d had a knife held to her throat, and she’d seen men murdered. This was worse. 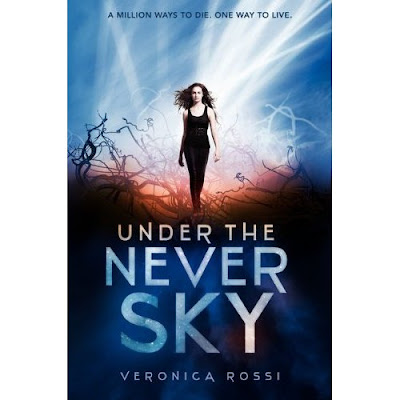 Exiled from her home, the enclosed city of Reverie, Aria knows her chances of surviving in the outer wasteland—known as The Death Shop—are slim. If the cannibals don’t get her, the violent, electrified energy storms will. She’s been taught that the very air she breathes can kill her. Then Aria meets an Outsider named Perry. He’s wild—a savage—and her only hope of staying alive.

A hunter for his tribe in a merciless landscape, Perry views Aria as sheltered and fragile—everything he would expect from a Dweller. But he needs Aria’s help too; she alone holds the key to his redemption. Opposites in nearly every way, Aria and Perry must accept each other to survive. Their unlikely alliance forges a bond that will determine the fate of all who live under the never sky.

I've actually already read UNDER THE NEVER SKY--as an advanced reader copy version I snagged from Brodi Ashton--but it's so good I want to read the hardcover addition now, and then place it lovingly on a shelf in my library. I first heard about UNDER THE NEVER SKY when I met Veronica at SCBWI L.A. last summer. Let me tell you, Veronica is drop dead gorgeous and equally as nice--and when I got my hands on her book a few weeks later, I found out that she's also incredibly talented. Within a matter of pages, Perry had stolen my fiction-loving heart. Honestly, this is one of the best books I've read in the last year.

KidA is fast asleep now, so it looks like the bookstore is going to have to wait even longer for me. *Sad Face* But what about you? What 2012 books have you been dying for?
Posted by Bree Biesinger Despain at 11:32 AM 7 comments:
Email ThisBlogThis!Share to TwitterShare to FacebookShare to Pinterest
Labels: book reccomendations, books I like, Jennifer Lynn Barnes, Veronica Rossi
Newer Posts Older Posts Home
Subscribe to: Posts (Atom)