Intorducing THE ETERNITY KEY: Book #2 of the Into The Dark series. Plus a super HOT suprise and a giveaway!

After slaving away over a mildly warm computer for several months, the fruits of my labors are finally starting to take form. Book #2 of the Into The Dark series is written, edited, and finally has a cover, title, and an official synopsis! Check them out below . . . and then keep scrolling for a super HOT surprise. (Trust me, you will want to see this!) 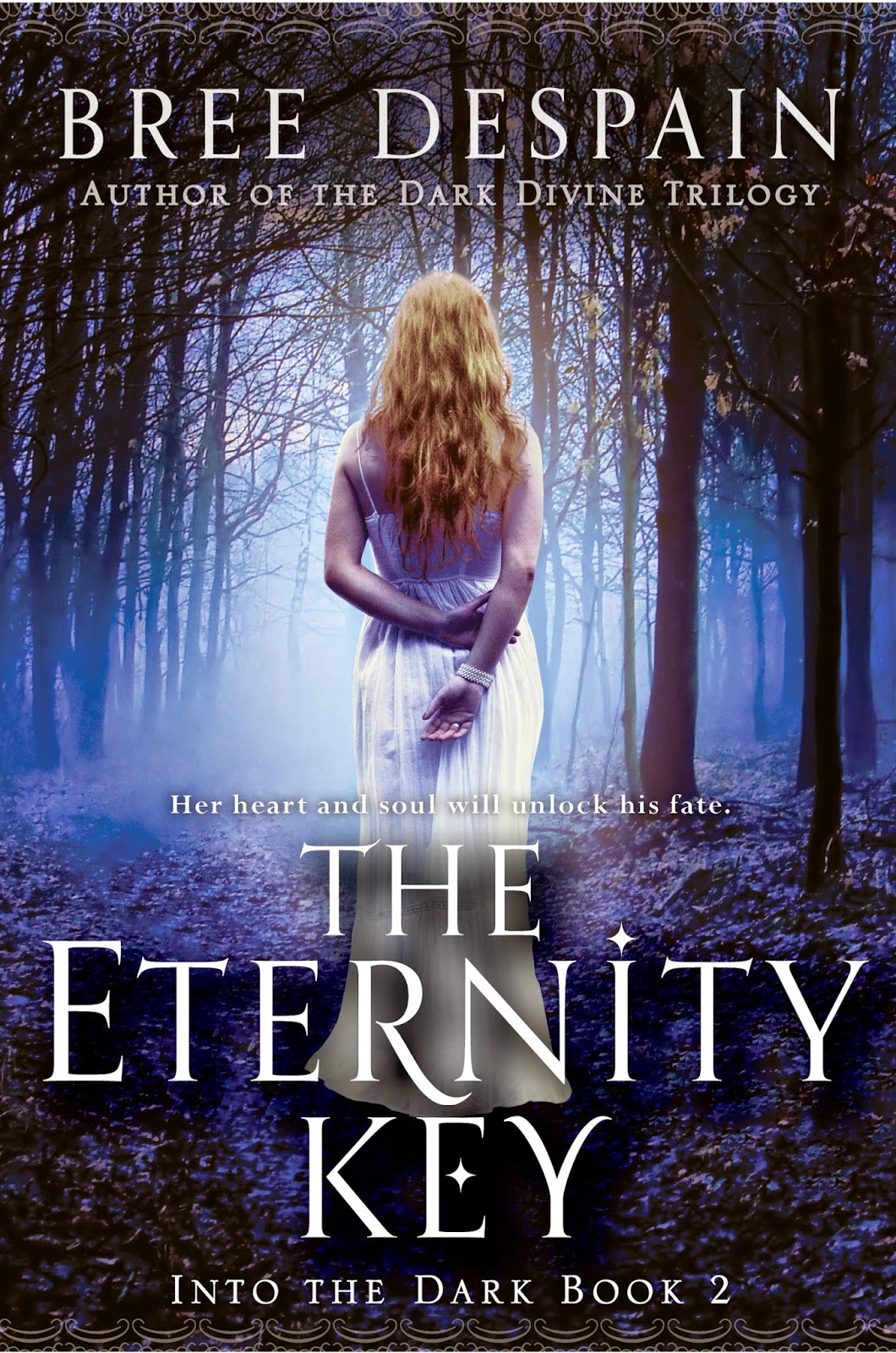 
Fan-favorite author Bree Despain continues her modern-day romance trilogy inspired by the Greek myth of Persephone and Hades with this second book in her Into the Dark series.

Haden Lord, the disgraced Prince of the Underrealm, has chosen love over honor and will do everything in his power to protect Daphne Raines, the human girl he was supposed to bring to the Underrealm. Haden's choice is put to the test as the Skylords and a figure from his past arrive in Olympus Hills with a plan that could destroy all of the realms.

Embracing her destiny as the Cypher, Daphne begins to understand the immense power of her musical ability to control the elements, but she must come to terms with her feelings for Haden and what she must sacrifice in order to protect him and her friends.

Believing the Key of Hades is the only thing that can stop the Underrealm Court from releasing the monstrous Keres on the mortal world, Haden, Daphne, and their friends set out to find the Key before Persephone's Gate opens again on the spring equinox.


THE ETERNITY KEY will be hitting shelves some time in Spring 2015, but if you're looking for a review copy, I hear that it is already available on Netgalley.


Okay, so you may have noticed that the cover for THE ETERNITY KEY is significantly different from the hardcover of THE SHADOW PRINCE (Book #1 of the Into The Dark series). Well, surprise, that's because TSP has gotten a HOT (or is that HOTT!? Or maybe even HAWT??) new cover design for the paperback!*** 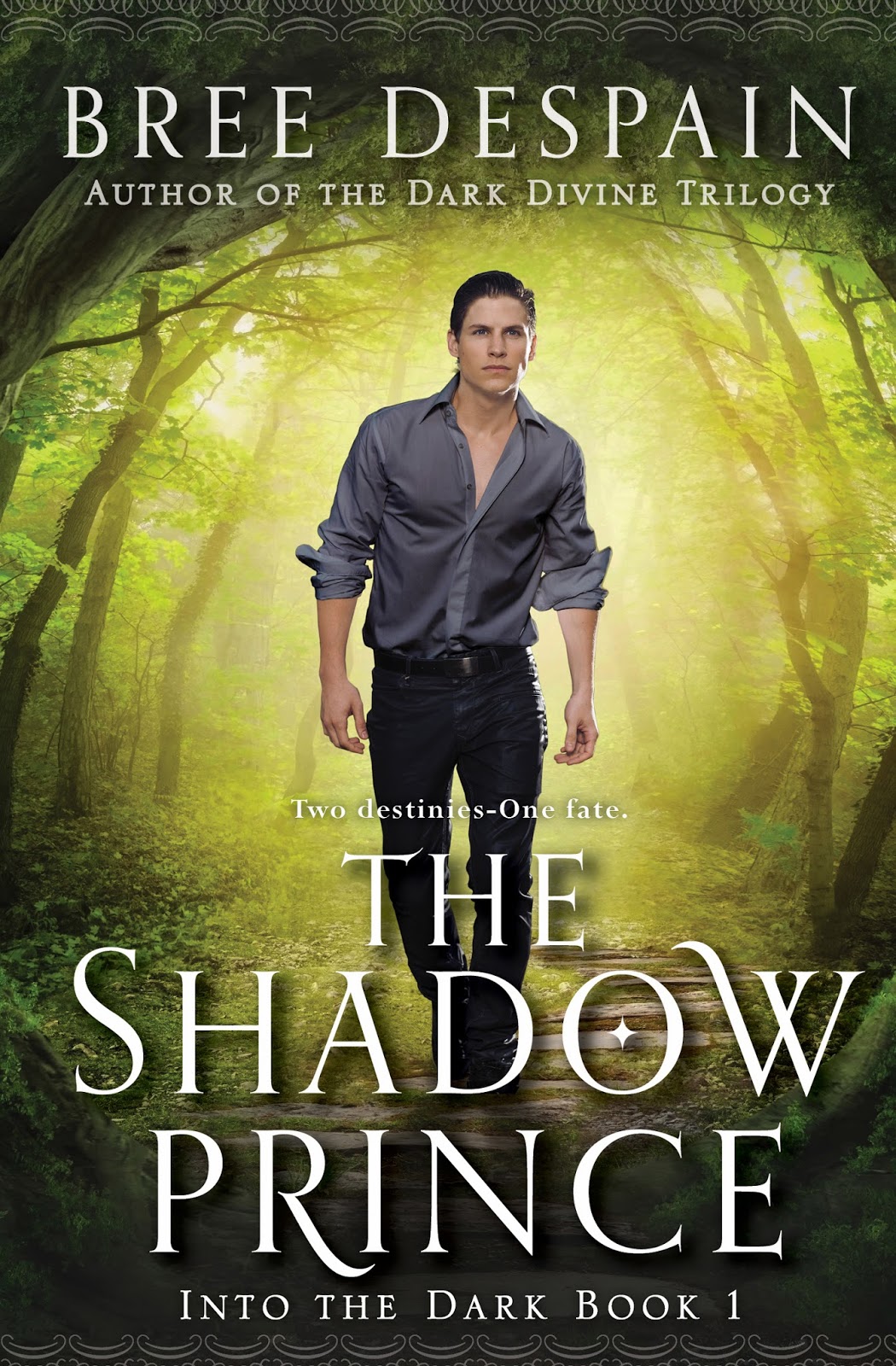 Not only does TSP have a schmexy new cover, it also has a new official synopsis.
Check it out below:


From Bree Despain, the fan-favorite author of The Dark Divine trilogy, comes her highly anticipated second young adult series: a contemporary adventure inspired by the Greek myth of Persephone and Hades.

Haden Lord, the disgraced prince of the Underrealm, has been sent to the mortal world for six months in order to convince Daphne Raines to return with him to the land of the dead.

If Haden succeeds, his honor and standing will be restored in the royal court, and Daphne will be sacrificed to save us all.

The complication he didn't see coming: he's the one who falls in love.

Now Haden must choose to either fulfill his sacred duty or to follow his heart and find a way to rewrite his and Daphne's destinies.


Btw, the paperback edition of THE SHADOW PRINCE will be available in April 2015--and you can already pre-order it HERE.

To celebrate the new covers, I am going to give away the very first signed ARC of THE ETERNITY KEY to one lucky winner. (Please note: I don't have ARCs yet, but when they arrive, the very first one out of the box and signed will go to the winner.) All you have to do to enter is share one or both of the new Into The Dark covers with you friends. Use the Rafflecopter below to enter.

Q: Why did the cover for THE SHADOW PRINCE change?
A: Because if certain powers that be want a different cover for your book, and you have a smart publisher, you get a new cover.

Q: Is this the third cover design for TSP?
A: Yes, yes it is. I guess some books are trickier to cover than others. Maybe that's because TSP is so many things rolled into one story: fantasy, contemporary, adventure, mystery, romance, etc.

Q: Does this mean my hardcovers for the series won't match now?
A: Unfortunately, yes. I know, I know, that always bugs me too. But you gotta admit that new cover for TSP is pretty HOT.

Q: These covers are kinda romancey, will boys like this series too?
A: Yes, I think so! The story itself has a ton of appeal for both female and male readers. Heck, the main character is a dude! This series has everything from explosions and monsters and gods and a love story and music and quirky characters and a tiny adorable cat who will probably kill you if you make her angry. There's something for everyone! (If I do say so myself. Heheh.)

Q: Did you design the covers?
A: No! People far more artistically talented than I designed the covers for my publisher. I just write the books.

Q: Did you get to pick the cover models?
A: I didn't pick the model for Daphne on the TEK cover, but I did get some say in the model for Haden on TSP. He was one of a few that I picked out as possible hunks to get the privilegeq of being my Underrealm prince.
Posted by Bree Biesinger Despain at 9:00 AM 4 comments:
Email ThisBlogThis!Share to TwitterShare to FacebookShare to Pinterest
Labels: cover, Daphne Raines, Haden Lord, Into the Dark series, the eternity key, the shadow prince
Newer Posts Older Posts Home
Subscribe to: Posts (Atom)