Winners of BACK WHEN YOU WERE EASIER TO LOVE

Here are the winners of signed copies of BACK WHEN YOU WERE EASIER TO LOVE by Emily Wing Smith (as chosen by Random.org):

Winners, email me at readbree(at)gmail(dot)com with your shipping address. If you can get it to me before 7pm MST tonight I can get your copy signed specifically to whomever you want.

Everyone else, I hope you'll go out and buy a copy of this fabulous book! And thank you for sharing your "loved" books with the rest of us.
Posted by Bree Biesinger Despain at 11:15 AM 1 comment:
Email ThisBlogThis!Share to TwitterShare to FacebookShare to Pinterest
Labels: contests, Spread the Love, winners

Spreading the Love: Emily Wing Smith and BACK WHEN YOU WERE EASIER TO LOVE (Giveaway) 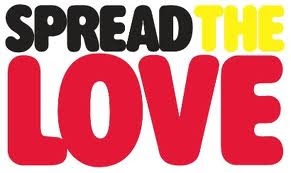 Sorry for the blog silence (I know, I know, I've said that a lot lately) but I'm hard at work on book 3 of the Dark Divine trilogy. (Yes, there is a book 3! It comes out December 27th--hence why I'm working on it so furiously.)

Anyway, I'm taking a little break from writing about Grace and Daniel in order to start a new feature on my blog called "Spreading the Love."

Even though I've been holed up in my writing cave for the last several weeks, I've still been in tune with the YA world enough to notice that there's been a lot of bashing and anger and hating going on around the interwebs lately (over a myriad of topics from all different view points). In my opinion, hate is a nasty, contagious, disease that I would prefer to stay as far away from as possible so I don't get infected with it. (I'm neurotic enough, I don't need anything else to obsess over.) I just don't have time for hate in my life. I'd much rather spend my time talking about the things I love--and why I love them.

Which is why I want to spend a little time each week "Spreading the Love." So for the next little while, expect a series of posts from me about the things I love.

To kick off "Spreading the Love," I'd like to tell you about one of the people I love the most in the world: Emily Wing Smith. 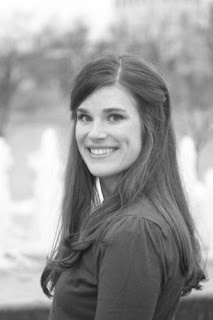 Emily is one of my critique partners, a dear friend, and one of the reasons I am a published author today. Seriously, I don't know if THE DARK DIVINE would even exist if it weren't for the amazing Emily Wing Smith.

Here's why: Emily and I met several years ago (about 11, I think) when we were both taking a YA fiction writing class in college. I loved Emily's writing and was in awe of her talent. We got to know each other a little bit during that class, but after it was over, I didn't see her again for many years. About 7 years ago (I think) I went to a writing conference called Writing and Illustrating for Young Readers. It was during a time in my life that although I was very determined to become an author--I felt very daunted by the task of trying to do it all by myself. I went to that conference looking for a little inspiration, and what I found was Emily.

Em and I ended up in an advanced writing class together and by the end of the week we'd re-sparked our old friendship. It felt so awesome to have a writer-friend again. Em and I started talking about putting together a critique group with another writer-friend from our old college class. Soon a fourth person was added to our little group that met once a month to share our writing, critique each others' work, and just plain lend our support.

It wasn't long after our little group started meeting that I decided to challenge myself with a new writing project: a story about a girl named Grace and a boy named Daniel. My group encouraged and helped me through so many drafts of THE DARK DIVINE over several years. Our group has grown over time (there's six of us now--which is why we call ourselves The SIX) and we are more than a critique group. I'd say that we are best friends who also happen to critique.

Emily was the first in our group to get a book published. A beautiful collection of stories called THE WAY HE LIVED. Seeing Emily succeed prompted me to take a chance and start submitting my stories around, and a little while later, I sold the Dark Divine trilogy.

Emily and I (along with Brodi Ashton and any other member of The SIX who is available) meet almost every Thursday to write, talk through plot points, and mostly just enjoy spending time with other people who "get" what were going through as writers. It's pretty much what keeps me sane. 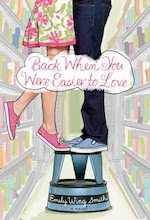 This Thursday, April 28th, Emily's second book, BACK WHEN YOU WERE EASIER TO LOVE, is going to be released!!!

This was actually the book Emily was working on all those years ago when we met at that conference. I've had the privilege of reading and critiquing several parts of this book--and I can't tell you how excited I am for this book to finally make it out into the world. It's beautiful, romantic, thought-provoking, and also a lot of fun. Who could want more than two hot guys, a road trip, an unplanned Vegas detour involving Barry Manilow, and lots of Sprite?

To celebrate the book release, I'll be joining The SIX in our one and only performance as our Barry Manilow cover band "The Barely Manilows" at Em's launch party at The King's English Bookshop this Thursday (7:00 pm). As the most non-musical, non-coordinated person in the world, it means a whole darn lot that I'm willing to make a fool of myself for Emily and her book. (And you certainly don't want to miss it!)

For those of you who can't make the party, don't worry, as part of my "Spread the Love" series, I'm going to give away 2 signed copies of BACK WHEN YOU WERE EASIER TO LOVE here on the blog...so you can love it just as much as I do.

All you have to do to enter is leave a comment about a book you love--or a book you're looking forward to. That way you can "spread the love" for that book to the rest of us.

THE GIRL WHO WAS ON FIRE Winners posted (early)

Whoops! Apparently I got my dates mixed up and I was supposed to post my winners for this contest on the 7th instead of the 11th...yeah, me and numbers just don't mix. So yes, I am closing this contest a few days earlier than I said I would.

Anyway, our 2 lucky winners who will be receiving a copy of THE GIRL WHO WAS ON FIRE are:

Winners, please email me at readbree@gmail.com with you mailing address. I will then forward those on to SmartPop Books who will send you your copies.

So what do you all think of Josh Hutcherson and Liam Hemsworth being cast as Peeta and Gale? Are you ecstatic, outraged, indifferent?
Posted by Bree Biesinger Despain at 4:33 PM 3 comments:
Email ThisBlogThis!Share to TwitterShare to FacebookShare to Pinterest
Labels: contests, Smart Pop Books, The Girl Who Was on Fire, winners

In case you missed it yesterday, the post about the press release in Variety magazine and Jim Henson Studios that was here earlier was most definitely an April Fools joke :D... Beaker just couldn't possibly do Daniel justice.

p.s. For some real Dark Divine movie news, this is still the latest I have to share.
Posted by Bree Biesinger Despain at 10:36 AM 11 comments:
Email ThisBlogThis!Share to TwitterShare to FacebookShare to Pinterest
Newer Posts Older Posts Home
Subscribe to: Posts (Atom)