My Gift To You

Now that Christmas is over, and the kiddies are content to play with their new toys for a few days (and pretty much ignore me) it is time to turn my mind to other important things . . .my birthday! And this year isn't just any old birthday, it's one of those big-significant-scary-your-life-will-never-quite-be-the-same-milestone birthdays (let's just say there's a big fat number 3 in it). In an effort to count down to this significant day (and to ease the stress of leaving my twenties) I've decided to celebrate by presenting you all with a gift.

16 of them, actually. That's right, for the next 16 days leading up to B-Day, I will leave you a little gift on my blog for your enjoyment. And what is this amazing gift that I've been working on for many days to make for y'all?

It's the THE DARK DIVINE PLAY-LIST/SOUNDTRACK!!!!

Okay, so many of you are probably thinking, what the heck is The Dark Divine--and how can it have a soundtrack? And why is Bree so darn excited about it?

First off: The Dark Divine is the title of MY BOOK. Second: Yes, books CAN have soundtracks.

I know a lot of authors are posting play-lists of songs that inspired the writing of their novels--yeah, I'm not all that original or anything--but I am proud to say that my song-list is way super awesomer (I know, I know awesomer is not a real word) because not only is it a list of songs that inspired my writing, but I've also arranged them in a way to reflect the mood/characters' thoughts/progression of the novel. In other words: it's a book soundtrack!

How awesomer is that?! And it totally wasn't easy, either. I mean, some real painstaking work went into selecting these songs and arranging and rearranging them just right. Good thing I've got all this time and anxiety to kill . . . too bad for hubby I didn't channel any of it into doing the dishes . . .

Anyway, I was going to just post the whole thing at once, but then I realized that most people (other than myself) don't have the time to sit and listen to 16 songs in a row. So I decided that since there are 16 days until my birthday, I'll present one song a day for your listening pleasure. I'll also include a little description of the song and why it is part of the play-list. And then on the 17th day (January 13th--my B-Day) I'll post the entire play-list as a permanent resident on my blog so you can listen to any of the songs, anytime you want. (Because I'm hoping you'll all like the songs as much as I do--and it will put you in the mood to read my novel. :-))


To kick off our 16 Days of The Dark Divine Music Extravaganza, I present to you:

Pick up the Phone by The Notwist

I chose this song not only because it is a freaking great song and totally reflects the mood of my book, but also because of the line "Today, I will step out of your past"--which is exactly what happens in the first few pages of my novel when Daniel Kalbi (Grace's first love and Jude's former best friend) shows up out of the blue after a 3 year disappearance . . .

Oh, and don't forget to keep this image in your head while you listen to any of the songs: 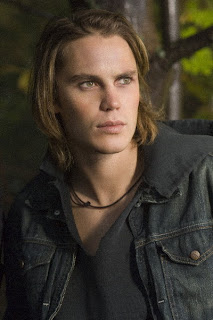 Because even though Grace is the main character, I found that most of the songs are from Daniel's point of view. Go figure . . .
Posted by Bree Biesinger Despain at 2:11 PM
Email ThisBlogThis!Share to TwitterShare to FacebookShare to Pinterest
Labels: about me, about my book, Daniel, favs, movie, my characters, playlist, soundtrack

I dig it! I can't wait for the rest! You guys always have the best music...

Love the song. Can't wait to find out what the rest of them are although I think I already know a few of them.

Did you know that the Notwist were here in Sept for a concert? I should have told you guys. It was pretty good.

Okay, Michelle, we are totally equal for the frosting incident of 2008. You MUST tell us these things. You and Brent are like our link to the outside world when it comes to music. I can tell people when the next writing conference will be--but when it comes to concerts, I am so dead to the world. The last concert I went to was Death Cab in 2006. 2006!!! How sad is that?

Valynne, I am very curious to know if your suspected songs are correct. We shall see . . .