Doing the Jammie Shuffle in LA

I have to say, it has been once crazy summer. Unfortunately I don't mean I got to spend it with the always lovely 80's John Cusack and Demi Moore in beautiful Nantucket. 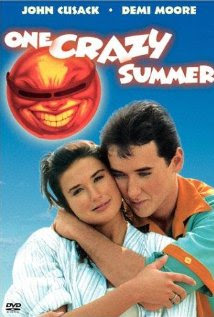 What I mean is that it has been one BUSY summer. The release date for THE SAVAGE GRACE is getting closer and I've been buried in writing and revisions. I apologize for not being as active on the blog as of late. But don't worry, there are lots of fun and exciting things to come. Speaking of which, the book cover for THE SAVAGE GRACE is really close to being released and I can't tell you how excited I am to share it. Patience. (That was as much for me as anyone else).

So I've just returned from the fabulous SCBWI LA conference with my lovely critique partners and best friends Brodi Ashton (EVERNEATH, Harper Collins Spring 2012) and Emily Wing Smith (BACK WHEN YOU WERE EASIER TO LOVE, Dutton - Available Now). It was an awesome trip full of fun, laughs, and surprises.

1.) Lindsey Leavitt is a riot. Many of you may already know who Lindsey Leavitt is (author of THE PRINCESS FOR HIRE series and her latest book SEAN GRISWALD'S HEAD), but you may not know that she is exactly the kind of person you want to hang out with at a conference like this. She almost literally bounces of the walls with energy, and pushes you to make sure you are actually having a blast. Of course that also means when it is 3 am and your about to pass out from exhaustion and she's trying to order a pizza and chocolate cake from room service, it can be difficult to turn her off. GO TO BED LINDSEY!

2.) Guilt Tweeting works. Emily wasn't going to go with us this year for various reasons, but as soon as Brodi and I arrived at the airport without her, we both immediately missed her presence. In an effort to express our sadness at her not being there, both Brodi and I tweeted about how forlorn and despondent we were that she would not be attending with us. Next thing we know, we get a text from Emily, saying she'd booked a flight and was going to meet us in LA the next day. Woohoo!

3.) Gary Paulsen is crazy. . . but in an extremely entertaining way. Between his stories of being in a Mexican prison, dog sledding, and his *honest* opinions about publishing, this became very very clear.

4.) I GOT TO STAND THREE FEET AWAY FROM JUDY BLUME! Ok, I didn't actually learn anything from that, it was just really cool. 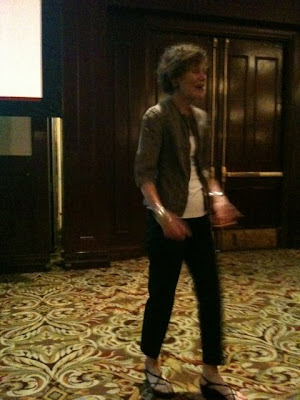 5.) If you put a whole bunch of writers in their pajamas, they turn it into a party! At first I was a little bummed that this year's ball was going to be a PJ party. Basically, that's what I wear to work nearly every day, and the ball at SCBWI is one of the few occasions that gives me an excuse to get a bit dressy. In the end, however, I think the pajamas made everyone a bit more relaxed and there was actually more people dancing. Lindsey can certainly bust a move in those PJs. The party went something like this...

6.) Brodi believes I must eat beef constantly, and insists this should be announced at regular intervals to everybody within a thirty foot radius.

7.) Apparently the only things I managed to take pictures of were Judy Blume and a book made out of chocolate. Obviously you can see where my priorities lie. 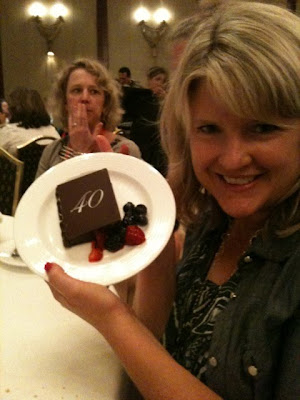 8.) I reaffirmed that I love Richard Peck. Seriously. What an awesome, sweet, and commanding speaker/writer/person.

9.) Gluten, dairy, egg free breakfast is nearly impossible to find in LA when you are in a hurry. I don't get it. I thought LA was all about catering to insane diet restrictions?

10.) On a related note, trail mix and water purchased from a hotel convenience store is as expensive as funding the next shuttle mission to Mars. But when you're allergic to everything else in the building and about to have a hypoglycemic attack… it'll do.

That's all for now. As I said, I've got a lot to share in the coming weeks and months as we get closer to THE LOST SAINT being released in paperback (this November) and THE SAVAGE GRACE in December.

Okay, next year I am going for sure. And THANK YOU for that SNL clip! One of my faves.

I may need to start going around announcing Brodi needs a Diet Coke at random intervals.

I'd leave a longer comment, but I have to go because Bree needs BEEF!

Wait... wen does the book come out?