I hope it's safe to say that I'm having the time of my life in NYC. (Again, hopefully I'm not being held hostage by slave traffickers while hubby hunts them down using his ex-CIA skills of awesomeness.) Anyway, one of the people I should be meeting up with is Chelsea Campbell a fellow Egmont USA author (we share the same editor!) and the evil mastermind behind THE RISE OF RENEGADE X. Chelsea is here on the bog today to answer a few questions and give a little something, something away. 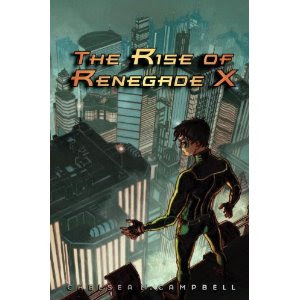 THE RISE OF RENEGADE X: Damien Locke knows his destiny–attending the university for supervillains and becoming Golden City’s next professional evil genius. But when Damien discovers he’s the product of his supervillain mother’s one-night stand with–of all people–a superhero, his best-laid plans are ruined as he’s forced to live with his superhero family.

Going to extreme lengths (and heights), The Rise of Renegade X chronicles one boy’s struggles with the villainous and heroic pitfalls of growing up.

Ages 14+. Available now for purchase, or look for it at your local indie book store!

Bio: Chelsea Campbell grew up in the Pacific Northwest, where it rains a lot. And then rains some more. She finished her first novel when she was twelve, sent it out, and promptly got rejected. Since then she’s written many more novels, earned a degree in Latin and Ancient Greek, become an obsessive knitter and fiber artist, and started a collection of glass grapes. As a kid, Chelsea read lots of adult books, but now that she’s an adult herself (at least according to her driver’s license), she loves books for kids and teens. Besides writing, studying ancient languages, and collecting useless objects, Chelsea is a pop culture fangirl at heart and can often be found rewatching episodes of Buffy the Vampire Slayer, leveling up in World of Warcraft, or spending way too much time on Livejournal and Facebook.

1. If you could have any super power, what would it be?

Teleportation! Then I could go wherever I wanted, whenever I wanted, for FREE. I could go to any con and not have to pay airfare or hotel expenses, since I could just go home for the night. I could visit foreign countries all the time, and if I needed to research a place for a book... ta da. It would make life so much easier.

2. Pretend you're on death row . . . What crime have you been accused of committing? Are you innocent or guilty? What would your last meal be?

I've been accused of the world's supply of hamburgers, but I'm not *quite* guilty because I left all the ones with toppings I didn't like (which would be quite a few), but no one believes me and I'm at least sort of guilty. My last meal is roast beef with potatoes and tons of butter. And maybe some cheesecake for dessert.
3. If you could go on a date with any fictional character, who would it be? What would you do?

Hmm. It's so hard to choose! Maybe Peter Parker, from the recent Spider-man movies. But he would probably show up late and then have to make excuses to go stop bad guys, so I would try and keep it casual, just some fast-ish food or something.

Thanks so much, Chelsea!

On to the giveaway:

Chelsea is giving away a signed bookmark to a lucky commenter. So tell us what you'd want your superpower to be, and I'll enter you in the drawing. Winners will be announced next week.

I'm over at Kristina McBride's blog today. Stop by and check out the interview!

If I had a superpower I would want it to be to cool fight skills. I would not have to be scared ever again.

If I had a cool superpower it would be to some how alter time so that I could get everything done!