So many things, so little time

So I have all these things I want to share with you all, including a video and Halloween pics, but I'm going to try to do it quickly since I've got a writing deadline staring me right in the face.

So here we go:

1. Have you heard about the great author smack-down between me and Brodi Ashton? It all started with me having a mental breakdown in a Costco parking lot last week, and ended with Brodi shouting at the top of her lungs "Bree hates BYU!" in the middle of a crowd of BYU fans buying snacks right before the big homecoming game. Basically, Brodi challenged me to a author smack-down and said that I MUST produce 45 pages of my sequel for her by 11:59 pm on November 2nd or else she will break my legs and spread lies about me on her blog. Since then, she has been incessantly tweeting, IMing, and texting me threats/encouraging messages. She's even had her blog followers come over here and leaves threats in my comments section.

Well, not to be threatened without a fight, I've challenged Brodi right back. She must produce a finished draft of her current work in progress by November 8th, or else I will send my burly New Zealand relatives after her.

Brodi has officially dubbed or fight the Chimichanga Challenge of 09. She is team tamale, we are team gluten-intolerance. Please go over to her blog and leave a few threats for me. We at team GI need to show her who's boss! (And don't tell her that I still have 9 more pages of writing to go by tomorrow night.) You can read more about the smack-down here and here.

2. You know how I told you all that I was going to finish my first draft of my sequel by November 24th? Yeah, well, due to unforeseen obligations and a few mental breakdowns (please refer back to the Costco incident) I've realized that isn't going to happen. Instead, I have decided to join the ranks of NaNoWriMo and extend my deadline to November 30th. If you don't know anything about the NaNo, it's a strange phenomenon where writers all over the world gather together during the month of November in an effort to write a 50,000 word novel from start to finish in 30 days. (They each write their own novel, not a giant communal one.) It is basically the NYC marathon of the writing world. You win simply by finishing by the deadline, and there are no prizes, just self satisfaction. Today was the official first day, and I surpassed the daily writing quota by a good 600 words. Go me!

3. Did I tell you that we sold audio rights to THE DARK DIVINE? I know I announced it on twitter, but I think I forgot to mention it here. I used to listen to books on CD all the time while I cleaned my apartment or did homework in college. And now I think it is infinitely cool that people will be able to listen to my book while they drive to work, or while they do the dishes. Just to think that my book may help brighten the mundane tasks of the world!

4. The Romantic Times is going to be doing a huge promotion of THE DARK DIVINE. Starting on November 16th, they will be posting a chapter a week from my book on their blog up until the release date on December 22nd. In conjunction with the serialization, they are also going to be running a 6 week long contest with 6 chances to win a signed copy of TDD and the TDD nail polish. In addition to all that, they will be running 3/4 page ads in their magazine and a feature on the book and a Q&A with me. I'll be sure to keep you guy posted on all of that.

5. Just got word that IndieBound has chosen THE DARK DIVINE as one of their Children's Picks for Winter. I'll link you guys to that when it's officially up on their website.

6. Have I mentioned to you guys just how much I LOVE Halloween? We had an absolutely great time. I carved a dark divine pumpkin to go along with my kid's pumpkins on the porch, and we handed out TDD bookmarks to the mommies who came around on Halloween with their kiddies. But my favorite park of Halloween is getting to wear a costume. I mean, why should wearing costumes just be for kids? Hubby gets even more into the costume thing than I do. In fact, he's the one who makes most of our costumes.

In the last few years we've been: The Scooby Doo gang, The Ghostbusters, The Justice League (yes, I was conned into a Wonder Woman costume by my husband--and NO, I will not post a picture of it here), The Teenage Mutant Ninja Turtles, and Jedi Knights. This year, we were a little lost for ideas until reading KidA his favorite bedtime story a few weeks ago. That's when we decided to go for a WHERE THE WILD THINGS ARE theme. KidZ decided to do his own thing a be a Clone Warrior from STAR WARS. But KidA is still impressionable enough to be talked into being Max while Hubby and I sported Wild Things costumes. Hubby even hand-sewed KidA's Max's Wolf suit. And I dare say he was the cutest kid at every Halloween party we went to. 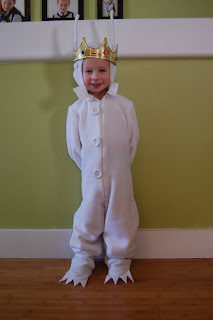 Max, the king of all the wild things 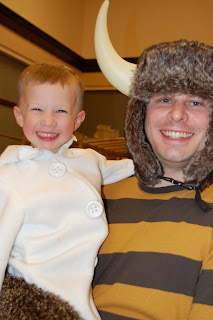 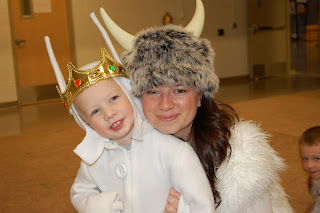 Me & my little Max 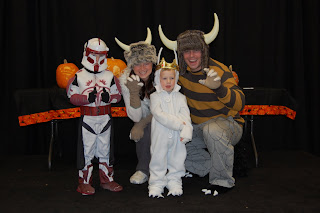 The Whole Wild Gang, including our Clone Warrior 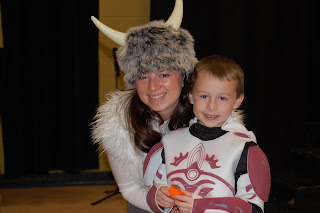 7. Last thing: We have finally finalized the Street Team--finally. We were so pleasantly surprised by the amount of applications we got. We were hoping for 10 members at the very least, but because the response was so awesome, we ended up adding a few more spots on the team and ended up 19 official members. But unfortunately, we still weren't able to accommodate everyone who wanted to participate. (Ah, if only promotional fundage grew on trees!)

Members have been contacted, and their goody packages are on their way. I loved the promotional plans and videos we got from everyone. I thought I'd share some of the videos with you all. Here's one of my favorites. I'll feature more of videos and other activities from the street team in future blog posts, but now for your entertainment, I give you Dani and her awesome little brother:

Love the Halloween costumes as usual. It is too bad the "KidZ" (I know his name, but whatever...I will comply with your charade) will no longer participate in family themed costumes. However, you still all looked great.

I've seen quite a few Where the Wild Things Are costumes this year, but your little KidA had the best Max costume by far. Kudos to the hubby on an excellent sewing job.

I love the Halloween costumes!

That is an awesome jack-o-lantern!!

Good luck w/ the smack down contest! You can win this!!

I'm so excited for the street team challenge!! Thank you again.

Love the pumpkin and your costumes!

And boy did Dani dish out the stops for that street team slot! :)

OH! I so tried to talk Mason into being Wild Things with Shane and I, so that my Max could be Max, but he declared that we was too old to participate in my theme costumes this year too, party poopers. You all look awesome, and very classic Maurice Sendak. Isn't Halloween the best?

Good luck with your deadline...you can do it!

Sweet costumes! I am very impressed! I made my KidA's costume this year too- a dragon- it involved more glue gunning than sewing though. :)

Can't wait to see all the street team vids/activities!

Hi Bree :)
Thank you for sharing.
I loved the costumes!
I'm looking forward to The Dark Divine.
All the best,
RKCharron
xoxo

Hey- my deadline is November 11th! I'm counting it from the first Wednesday I actually took the challenge.

I need every, stinking precious hour. Speaking of hours... yours are ticking. You can do it! Go NaNoWriMo!

Awesome costumes. Your little "Max" is so cute!

Very cool jack o'lantern! And your son as Max = the most adorable thing ever.

Yay about the audio rights! There aren't enough awesome YA books in audio format.

Thanks for all the costume compliments. Wish I could take the credit--oh, no, wait I don't. Cuz that would mean that I'd sewed them. And I don't sew. I only wish one of these pics had shown off Max's tail. That was one of the cutest things about the costume.

Fine, Bro, November 11th it is! You know I have a hole in my brain, right?

The costumes are FABULOUS! I loved the themed group (even with the clone warrior), I bet you guys had a great Halloween!

Ack! You got me sidetracked...again!

*music playing* We gave you the weekend, audience free, but now we are back and we of Team Tamale are watching. How many words? You look close to finishing...we at Team Tamale know you can do it, but just to add to the encouragement, I'll stand here with my yard stick just in case you stop typing away.

(P.S. Did the title brainstorming from last week help? Hope so! Oh, don't answer yet, otherwise I might have to swat you with the yard stick.)

I did a amazon search for your book yesterday and thought it was so awesome I could pre order it. Its on my amazon christmas wish list!

Una- I made the 45 page deadline, but now Brodi is demanding the rest of the novel. Oi. Good thing I'm Nanoing, huh?

Dani- I LOVE the video. It is so cute. And thanks for the love on the pumpkin and costumes.

Shellie- Thanks for looking up the book on Amazon!

Oh, Bree, I just read the news on Brodi's blog. Congratulations!!! We KNEW you could do it! Hey, if you could do this little Chimichanga challenge, you can definitely conquer the NaNo challenge. (Why is it, every time I see "NaNo", I think Mork and Mindy?!?!)

If you like, Team Tamale would be more than happy to continue threatening *ahem* encouraging you for the NaNo NaNo challenge! =) It'd be our pleasure to help!

Una- Now I've got all sorts of Mork and Mindy references stuck in my head!

And keep the threats coming! I need them.

*music playing* Just checking in, watching over your shoulder, to see how many words....how many new chapters you have completed since our last official check in. Since you know we are watching you....

I didnt know Bricky sews!! Who would have known? VERY impressed! And i am SOO excited that it is only a month away...i am sure the anticipation you are all feeling is unreal!! ENjoy the moment- this moment will never happen again!! CONgRATS and i cant wait to buy the book!